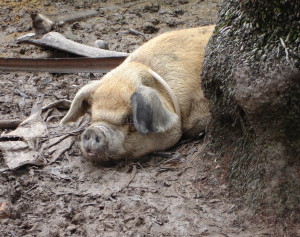 These days everyone not only has an opinion but 30 different places to deliver it.  It’s no wonder people are often careless and even downright mean in talking about someone.  From Facebook to Twitter, and text messages to emails, criticism has taken on an entirely new element.  People no longer have to stand behind their comments in person so many people say things they otherwise never would about someone in person.

Maybe you’ve had this happen to you, or maybe you’ve seen it happen to a friend.  Either way, it’s not pretty.  Criticism leaves a harsh sting even when it’s done in love let alone in that rotten way.  It’s tough to know just how to deal with it effectively and in a way that honors God.

I love the quote from George Bernard Shaw, a playwright and activist for the working class.  He says, “Don’t wrestle with pigs.  You’ll both get dirty and the pigs will love it.”  The same sentiment is found in Proverbs 9:7-8; “Anyone who rebukes a mocker will get an insult in return.  Anyone who corrects the wicked will get hurt.  So don’t bother correcting mockers; they will only hate you.  But correct the wise, and they will love you” (NLT).

The book of Proverbs offers lots of wise advice on how to handle many situations we encounter in life.  Here it’s telling us not to bother with people who carelessly or maliciously make negative comments toward our friends or us.  We won’t accomplish what we want if we try.  Instead, it says to use that energy in a more positive environment.  Has someone’s comments been dragging you down?  Don’t waste your time on them.  Instead, go do something worthwhile with someone who knows your worth!

Be a witness
-Nate