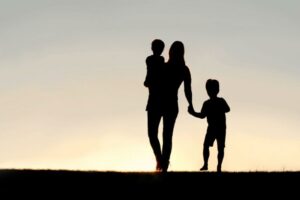 Every year more people are facing the difficult task of parenting without a helpmate. With a job to hold down, a schedule to keep, errands to run, books to read, games to play, “ouchies” to bandage,  and bills to pay, parenting is a monumental undertaking when there are two engaged in the task. If you’re facing this challenge alone you have my sincerest respect and empathy. You are a warrior!

Believe it or not, the Bible references several single parents who can give example and encouragement to you in the battle. These people became single parents through a variety of circumstances. God’s intention was for children to have the benefit of a mom and a dad, but there’s no doubt He has compassion on parents who are raising children on their own.

God’s instructions for parenting are the same for both single parents and married. I can only imagine He gives extra grace and strength to those facing the enormous task alone. We see that in the first single parent mentioned in Scripture, Hagar.

Hagar’s story is found in Genesis 16. She was a slave who became pregnant with her master’s (Abraham) child as a result of her master going outside of God’s will to see a promise fulfilled. When her pregnancy became apparent, she ran away from the anger of her master’s wife. But as she fled, God came to her to let her know that He was with her. What Hagar found is when we cry out to God, He sees us and holds us close.

Parenting alone is often a difficult and lonely task. But those who know Jesus as their Lord can remember that they are never alone and that He cares deeply about them and their children (Psalm 68:5).

If you are parenting without a spouse, the church where I pastor (The Bridge) cares about your struggle. Be watching for information this fall about a special support group just for you.

Be a witness,
Pastor Nate