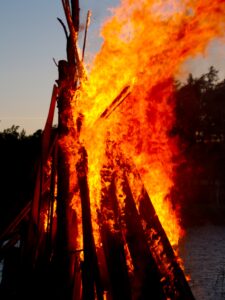 This verse, a prelude to one of my absolute favorite Old Testament stories, happened to be in my devotions this morning; “And Elijah came near to all the people and said, “How long will you go limping between two different opinions? If the Lord is God, follow him; but if Baal, then follow him.” And the people did not answer him a word” (1 Kings 18:21, ESV).

Elijah is clearly upset about the double-mindedness of the people.  It seems that they sometimes liked God…you know…when they felt like He did stuff for them and all.  But they were easily distracted by other things in life and the glamor of this or that fad.  So much so in fact, that they would worship other gods, including Baal.

The story goes on to chronicle a showdown of sorts between God and Baal.  Elijah challenged the people to prove Baal or God’s authority and power by setting up two altars of wood and then calling on their respective Gods to light the pile of wood on fire.  The people agreed to this challenge and Elijah even let them go first.

After they had tried desperately to get Baal to light the fire…shrieking, crying out to him, even cutting themselves to get his attention…it was finally Elijah’s turn.  And just to be sure they knew fully the power of God, he dug a trench around his stack of wood, and poured gallons and gallons of water over the pile until it was soaked and the trench was full.  Then he prayed to God to demonstrate His power and sure enough…the wood caught fire and burned so hot that it evaporated the water in the trench!  That’s some good stuff right there!

Not much has changed, has it?  If I had to take a stab at what single issue would make the biggest difference in our world today…I would put the answer squarely where Elijah did…we are certainly a weak and double-minded people.  We shout “PEACE” while we fight to get it.  We think Jesus is a pretty neat guy, but don’t listen to His full teaching (you know…that whole, “I am Lord” thing).  Instead, we take the parts that are en-vogue, seem reasonable to our understanding or pattern of justice, and look to the world to fill in the gaps that only God can fill.  And time and time again we find at the end of the shopping trip…after the buffet…when we come down from the high…when we log off the porn site or leave the lover who is not our spouse…when even our friends and family fail us…just how weak sauce that stuff really is.  And even though we know that in the deepest parts of our being…back we go again.

The end of verse 21 above says, “And the people did not answer him a word.”  I’ve often wondered why the people had nothing to say in response to Elijah initially.  But I think I know why.  It’s because THEY knew.  They knew…just like you and I know who the one true God is.  They knew because it wasn’t the first time God had shown His authority and power.

How about for you?  How many times in your life (and for millennia past) has God shown His strength, His authority?  How many times has He proved Himself to you?  And as Elijah said, “For how long will you go limping between two different opinions? If the Lord is God, follow him; but if ____________ (is god), then follow _________.”  And I would add, “Go all out.  Give ALL of yourself to that.  Do it completely.  Don’t go limping between two different opinions because they are different.”

I want you to know I’m not saying we should eat only rice and never buy new clothes, cars, gadgets, or tools.  I’m certainly not saying to give up on friends, family, and neighbors.  But I am saying we need to take stock of what all those things really are in light of the Gospel of Jesus Christ.  We need to be sure we aren’t looking to those things as gods because worshiping those gods…isn’t going to get the fire lit.

Be a witness,
Nate